By utilizing our spring manufacturing technology that we have nurtured over the years,


we have solved a whole host of spring-related issues in various fields.

Other Places You Will Find Tokai Springs 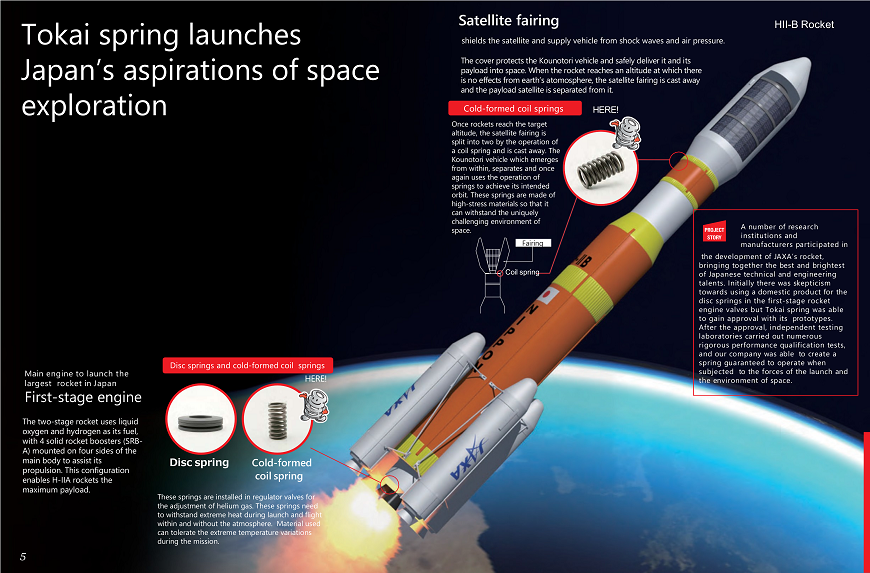 In the past, all rockets launched by Japan used parts made in the U.S. However, the birth of the
Japan Aerospace Exploration Agency (JAXA) greatly changed the direction of Japanʼs space industry. JAXA’s new mission was to build rockets exclusively of parts made in Japan. Developing high-precision springs was a critical element of this mission.

The International Space Station (ISS), in low Earth orbit at around 400 km above the Earth’s surface, is a giant experimental facility roughly the size of a soccer field. In this station, 15 participating countries, including Japan, engage in experiments and research that utilize the special outer space environment, and in the observation of Earth and
celestial bodies. To transport food, supplies, and the equipments required for the experiments to the astronauts stationed at the station, JAXA developed the space station supply vehicle named “Kounotori”.
The Kounotori is launched aboard the “HII-B Rocket”, the largest rocket manufactured in Japan by Japanese companies. The rocket marked its third successful launch and supply mission in July 2012 and the achievement was highly praised internationally.
Tokai spring was used in the HII-B Rocket’s engines and in its fairing; the component that houses the Kounotori vehicle. These springs are able to function even when subjected to the tremendous forces that occur during a launch, as well as in the absolute zero (roughly -270 degrees Celsius) temperature of outer space. Tokai spring applied its technical and engineering expertise to develop and produce specialized springs for the rockets and fairings. A symbol of pride for the Japanese aerospace industry, the successful launch also greatly raised hope for future space missions among the people of Japan.
Japanese space technology will continue to evolve to ultimately achieve manned space flight into space and Tokai spring technology will be a critical part of this development by providing high performance springs.

The two-stage rocket uses liquid oxygen and hydrogen as its fuel,
with 4 solid rocket boosters (SRBA) mounted on four sides of the main body to assist its propulsion. This configuration enables H-IIA rockets the maximum payload.

These springs are installed in regulator valves for the adjustment of helium gas. These springs need to withstand extreme heat during launch and flight within and without the atmosphere. Material used can tolerate the extreme temperature variations during the mission.

The cover protects the Kounotori vehicle and safely deliver it and its payload into space. When the rocket reaches an altitude at which there is no effects from earth’s atomosphere, the satellite fairing is cast away and the payload satellite is separated from it.

A fairing is like a cone-shaped cover that protects the “payload” of satellites and refueling vehicles that are launched into outer space by rockets. The fairing protects the payload from air resistance on the ground and the high temperatures of the atmosphere and detaches from the satellite or vehicle when it reaches outer space to leave the payload stored in the fairing exposed.

A number of research institutions and manufacturers participated in the development of JAXA’s rocket, bringing together the best and brightest of Japanese technical and engineering talents. Initially there was skepticism towards using a domestic product for the disc springs in the first-stage rocket engine valves but Tokai spring was able to gain approval with its prototypes.
After the approval, independent testing laboratories carried out numerous rigorous performance qualification tests, and our company was able to create a spring guaranteed to operate when subjected to the forces of the launch and the environment of space.

These springs are designed to withstand use in the harsh environment of outer space.

Supports Multi-Purpose Use in Outer Space Unlike on earth, there is no gravity or temperature in outer space. This is also a very important fact for springs, and in many ways, springs for outer space applications differ from how they are designed on earth. This section introduces new springs that can be used for various purposes in outer space.

The SSR has a mechanism that instantly expands from a compact stowed state by way of spring action. At maximum expansion, the SSR becomes a rigid rod.
As the structure of the SSR is extremely simple, it has a proven track record of being used as a functional component in outer space due to its strengths of avoiding the risks of malfunction and being lightweight. 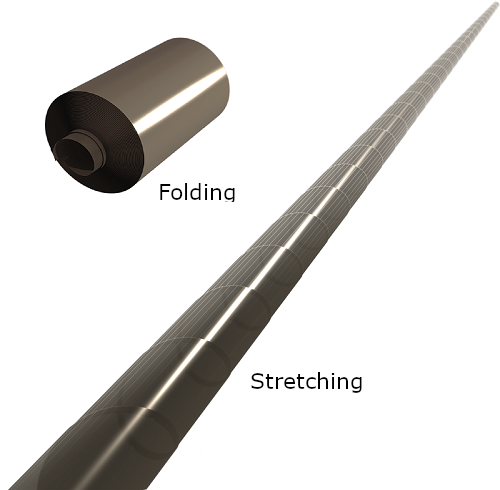 This section introduces an ultra-small disc spring that was ordered for pressurizing the detection element of the infrared detector mounted on the space observation satellite, “Akari”.

The diameter is extremely small at φ3 mm. Furthermore, operating performance at extremely low temperatures close to absolute zero was required. The spring is extremely small, and because the design is a combination of multiple layers, it is important to select the orientation according to how the spring will be used. This specification cannot be achieved without world-class manufacturing technology. 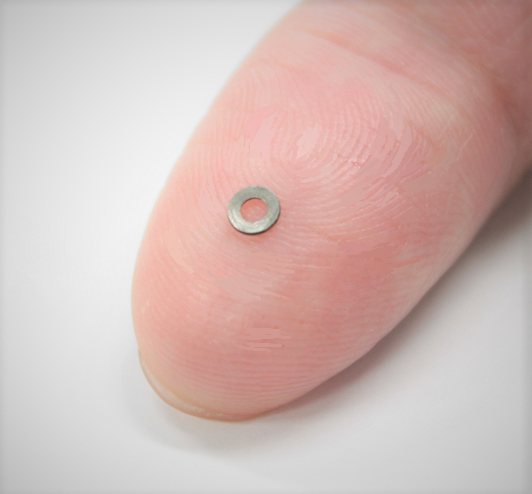 Brimming with Expertise Gained from Our Vast Track Record

The design of springs for aerospace applications is extremely demanding and a lot of know-how is required to manufacture these highly complex springs. We propose designs to our customers that make the best use of our expertise cultivated from our extensive track record! I want to ensure the durability of my springs! I want to check the performance of my springs! I want a custom-made spring! I want you to make a prototype starting with a single spring! If you have any requests like those above, please feel free to contact us!Click here to contact us.

Where Else Will You Find Our Springs? 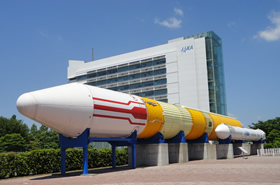 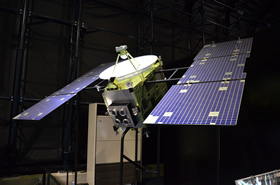 Examples of Our Pursuit of Perfection