The symbols used for compression springs design are shown in Table 1 below. The values of the transverse elastic modulus (G) are based on Table 2.

The symbols used in tables and calculation formulas here are in accordance with JIS (Japanese Industrial Standards). The equivalent symbols that are used by ISO are shown in brackets [] next to JIS’ symbols.

As the load of a spring with linear characteristics is proportional to the deflection, it becomes

Calculate the Spring Constant from the Dimensions of the Compression Springs

In a compression compression springs, deflection is caused by twisting the wire diameter, and therefore the spring constant (k) is as follows.

Solid Height of compression springs (When the End Surface is Ground)

Mechanical Properties by Material at High Temperature for Compression Springs

There are two ways to combine springs: a series method that stacks the springs vertically and a parallel method that arranges them horizontally. Such a classification applies not only to compression springs, but also to disc springs and other types of springs, which are similarly used in series or parallel combinations. From the viewpoint of load, the combination method in which the forces acting on each spring are equal is called series, and the combination method in which the displacement of each spring is equal is called parallel. 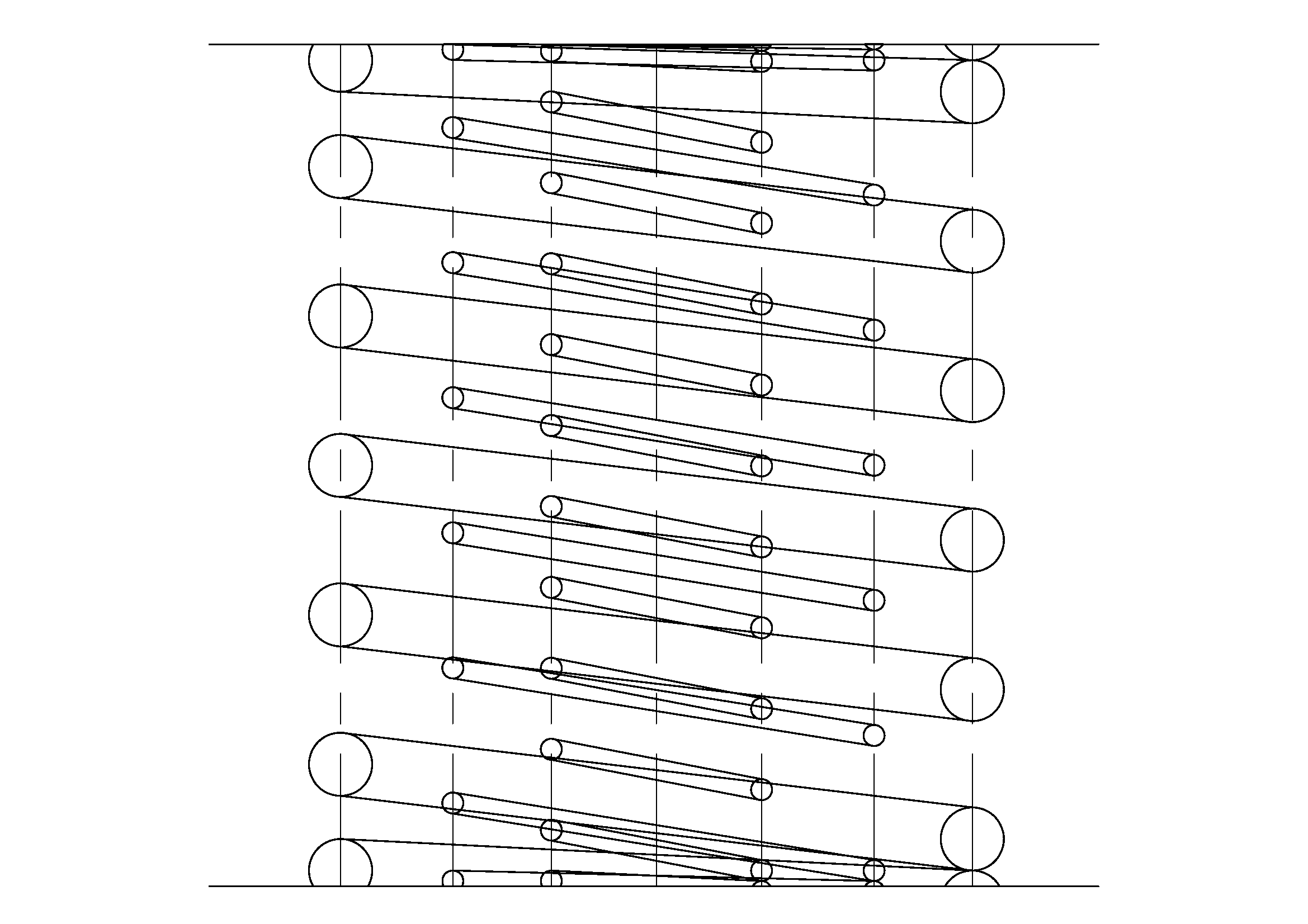 We mentioned that for parallel combination, the springs are arranged side by side, but this will take up space if you simply arrange them this way and so it is common to combine the springs internally and arrange them concentrically as shown in Fig2. This is sometimes called the main and sub springs. The lower, longer spring is called the main, and the upper, shorter spring is called the sub spring.
However, in the case of concentric combinations, it is necessary to alternately change the winding direction or to secure a certain gap between the springs so that the springs do not get entangled.
Also, by devising a combination of springs, it is possible to create nonlinear spring characteristics as shown in the figures a and b below. 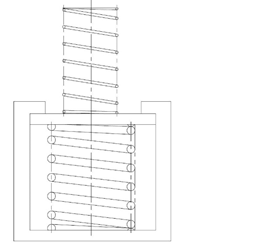 Energy stored in the spring

Fig6. Energy Accumulated in the Springs

This is generally known as the spring accumulated energy formula.

Formula 4 is when there is a linear relationship between the two, as shown in (a) above. In other words, it is only in the case of Formula 5 below.

The accumulation and release of energy as shown in (a), (b), and (c) of Fig6 when load is applied and removed, generally passes through the same load-displacement curve (straight line), and so all the energy accumulated by applying a load is released in the process of removing the load. However, in the case of a spring characteristic with a hysteresis loop as shown in Fig6 (d), the energy of the area surrounded by the loop is consumed in one cycle from when the load is applied to when the load is removed.

The Compression Spring Has Its Own Frequency

When a spring is subject to a load, deformed, or a force is applied and the force is removed, the spring vibrates. The frequency of this vibration differs depending on the spring, and each has its own unique frequency. When the mass of the spring itself is m, its natural frequency (f) can be represented as follows.

Here, α is a constant that depends on the conditions for fixing the spring and the direction of vibration. 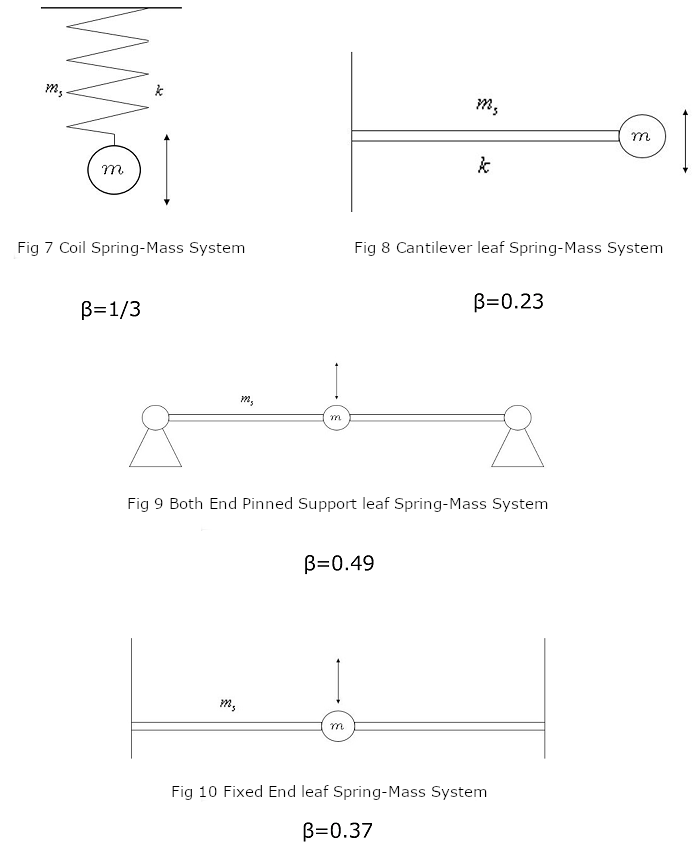 As shown in Fig7, 8, 9, and 10, the natural frequency (f0) when an object of mass (m) is fixed by a spring of mass (ms) and the object is vibrated can be represented as follows.

(Here, we will also explain this in the case of leaf springs.)

As the spring mass (ms) is often smaller than the mass (m) of the object, it is generally considered to be β = 0. However, when the mass of the spring must be considered, it can be approximated as β = 0.49 in Fig9 or β = 0.37 in Fig10.
When designing a spring, it goes without saying that the spring constant is important, but it is often the case that this natural frequency must also be taken into consideration.

Shock Absorption is Where Springs Come in Handy

A spring may be used as an effective means to soften the impact of a collision. As the criteria for evaluating the ability to soften a collision, the buffer efficiency (η) is defined as follows.

When a shaft load is applied to an elongated column, a phenomenon occurs in which the column is suddenly displaced laterally.
This is called buckling.
The load when buckling occurs is called the marginal buckling load.
Also, compression springs buckle when compressing to a certain height if large aspect ratio(Ratio of free height to mean coil diameter).

In the formula, E is the Young’s modulus, G is the transverse elastic modulus, and D is the mean coil diameter.
As shown in (a) of the fig11, μ is 1 when the both ends of the spring are rotatably supported, and 4 when the both ends are fixedly supported as shown in (b).
In addition, ξ becomes 1 if the section is circular in cross section.
The equation does not include the influence of wire diameter and number of coils, but because it is analyzing it by replacing the spring with a pillar.

According to a strict analysis that takes into consideration the helical structure of the spring, these effects are small with the springs usually used, so this equation is considered practical in practice.

Fig11. The state of supporting for compression springs

Formula 9. Ratio of deflection and free height until buckling of compression spring